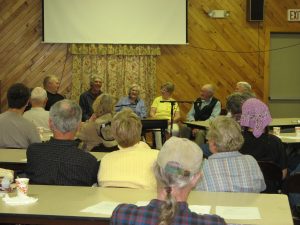 The first speaker of the year in January was Ron Krupp, author of Lifting the Yoke: Solutions to America’s Farm and Food Crisis, who spoke on gardening and sustainability. The May 3rd Annual Meeting was highlighted by the second series speaker, Elise Guyette, whose well-attended presentation, “Discovering Black Vermont: African-American Farmers in Hinesburg, Vermont” focused on early black settlers on Lincoln Hill. Ms. Guyette’s presentation was filmed by CHCVT and will be donated to the Library. In November, we were treated to Sydney Lea’s readings from his narrative poems and recollections of how he became an author and poet leading to his nomination as Poet Laureate of Vermont. The speaker series is jointly sponsored by the Library and the HHCT, and the next planned presentation will be in early winter. Topics of local historical interest appear to be a favorite, and an ‘Old Timers Recollections of Huntington’ is being discussed as a program for the coming year. “

Also, we have Susan Clark coming on March 3rd co-author of the book Slow Democracy. Susan is a writer and facilitator focusing on community sustainability and citizen participation. She is an award-winning radio commentator and former talk show co-host. Her democratic activism has earned her broad recognition, including the 2010 Vermont Secretary of State’s Enduring Democracy Award.